Board of Executive Officers

Company with a Nominating Committee, etc.

The Isetan Mitsukoshi Group transitioned to a company with a Nominating Committee, etc. in June 2020 for the purpose of advancing corporate governance. Through this transition in the Group’s organizational design, the roles of “execution” and “oversight” are clearly separated, and the role of the Board of Directors is focused on establishment of the Group’s general direction along with oversight/monitoring of business execution, thereby enhancing the oversight function of the Board of Directors.

An award system to recognize stylists, including sales representatives of working partners who play a key role in department-store business operations, for outstanding performance in day-to-day customer service. The system was started at Isetan Mitsukoshi and later expanded to all Group companies in fiscal 2012. In addition to employees of Group companies, partner staff dispatched by working partners such as external manufacturers are also eligible.

The Mitsukoshi wrapping paper used since 2019. This is the first in-house wrapping paper in a department store in Japan. It was originally designed for Christmas presents, but from the following year, 1951, it was always used at all Mitsukoshi shops. A novel design featuring many rounded, soft abstract shapes was painted by painter Genichiro Inokuma.

The “MacMillan Ancient” tartan used for Isetan shopping bags since 1958 was redesigned in 2013 as “MacMillan/Isetan.” It is officially registered in the Scottish Register of Tartans administered by the Scottish Government in order to manage all tartans around the world.

The credit card issued by the Isetan Mitsukoshi Group company MI CARD Co., Ltd. It has about 2.9 million members with refined tastes and purchasing power. The company is working to increase new membership and encourage the use of its cards by leveraging this excellent customer base to issue co-branded cards and expand business partners that accept MI Points, the Group’s point program.

The Mitsukoshi shopping bag used since 2014. It was conceived by Moriguchi Kunihiko, a master of the yuzen resist-dyeing technique and second-generation Preserver of an Important Intangible Cultural Property (Living National Treasure), based on the design of a yuzen-dyed formal women’s kimono. The design of repeated topological transformations on a white ground, titled Minori (“Ripening”), uses geometric patterns to represent an apple tree loaded with fruit. The freedom of yuzen dyeing and the one-of-a-kind design embody Mitsukoshi’s approach of creating traditions by always recognizing diverse value, striving for the freedom to discover absolute meaning, and repeating innovation. 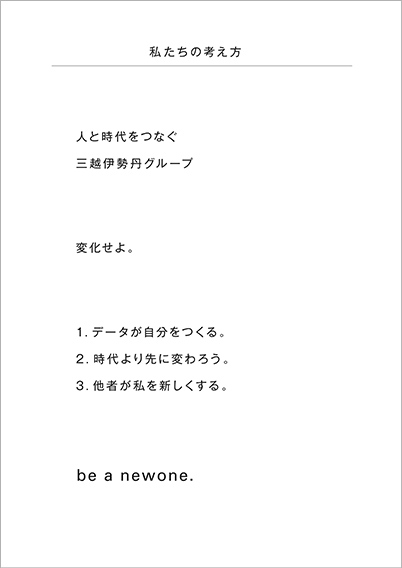 In the retail industry, the area where goods are sold is generally referred to as the “sales floor.” However, the Isetan Mitsukoshi Group refers to the sales floor as the “purchasing floor” in order to enhance the quality of customer service by adopting the perspective of the purchasing customer rather than that of the seller.

The Isetan wrapping paper used since 2019. Hand-drawn lines in red, yellow and green connect endlessly and continuously on a ground of white paper, evoking radiating light or spreading warmth. The letters I, S, E, T, A and N are written inside the spaces enclosed by the lines. The three colors used are inspired by the Isetan tartan “MacMillan/Isetan.”

In order to treasure the employees involved in “sales,” the most important of its business operations, and value them more than ever before, the Isetan Mitsukoshi Group revised the previous term “sales representatives” in fiscal 2012. All employees who come into contact with customers are now designated and addressed internally as “stylists.” The word “stylist” generally refers to professionals in the apparel industry, etc., but the duty of stylists for the Isetan Mitsukoshi Group is to “style affluence, appeal, quality, sensitivity, novelty and the future for customers” through customer touchpoints.

The Isetan Mitsukoshi Group refers to its business partners as “working partners.”